For over twenty-five years we have been exploring the boundaries of amplified acoustic instruments, developing the Violin, Guitar and Mandolin family instruments.

Up until now, our instruments have always incorporated the cutting-edge pickup technology of the day. Recent design projects have led us to the invention of our own exciting new pickup system. Twin sensing elements are strategically placed to optimize the string-to-body resonance of our instruments.

We are thrilled with the sound of this new innovative system and consider it a major step forward in violin amplification. The Aceto/Violect Pickup System is now available on both our Violect and N·V models. It is also available as a retro-fit for all Aceto/Violects? from 1988 to the present.as well as for use on acoustic instruments.’

In response to my customers, who loved the amplified sound of my standard pickup and who were asking for a system that had negligible effect on the instrument acoustically, I have redesigned the standard pickup to have a narrower foot width and a more solid structure .

Using high quality bridge blanks and well aged Bosnian bridge wood, the top portion is carefully mortised and firmly fixed into the base which houses the two sensors. This two-piece construction enables me to place the pickups exactly where I want in relation to the feet, giving the best response and most open tone while still holding up acoustically.

This bridge pickup is the model used on all our Artist series instruments and is now offered for use on all violins. This version has a bit less output than the original design but still strong enough to be used directly into a combo style amp. When well fit by a competent violin repairman, the tone is uncompromising and faithful to even the finest of acoustic instruments. 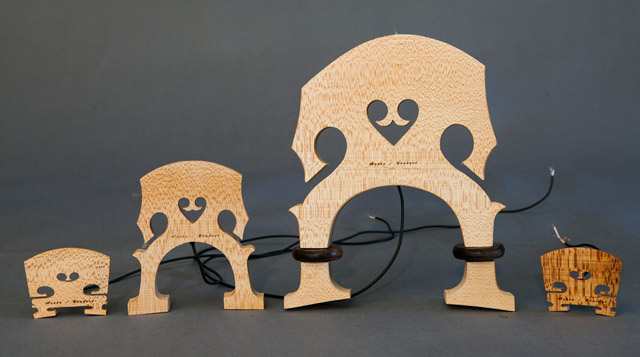 After two years of focused experimentation, I am ready to announce my new pickup/mic system for violin. This simple, reliable and great sounding dual system fits to any violin with no extra clamps or wires.

The pickup is my deluxe bridge pickup, using only the finest quality bridge blanks. The electret mic floats over the instrument on an adjustable yet stable arm. and was chosen, from most of the capsules available, for its clarity , response, feedback suppression and ability to match well with the pickup.

The chin rest mounted stereo jack has the pickup wired to the tip and the mic to the ring. Just take the fiddle from its case , plug in and ready to go. You can still use a mono cable to just use the pickup alone.

For those who already have a bridge pickup fit to the instrument , I also offer the system with just the mic and a connector to be wired to the existing bridge. Custom setups are also available.

Please get in touch if you would like more info.

For the best in pre amplification, I highly recommend the Grace design Felix preamp .http://www.gracedesign.com/products/felix/felix.htm

A review by Peter Anick

Amplifying a violin has always posed a problem for fiddlers.? Microphones have a hard time competing with other amplified instruments, while most electric violins do not have the same tone or dynamic response that an acoustic instrument has.? ? Pickups for acoustic violins, while preserving some of the dynamics of the acoustic instrument, tend to distort the tone, forcing you to compensate with preamps and equalizers.

Which is why I was intrigued by an amplified violinist I heard jamming at the Northampton, Massachusetts “Django in June” festival.? In spite of the amplification, he blended well with the other acoustic instruments and, on closer inspection, I could barely tell the difference (other than volume) between his acoustic violin and the sound coming through the pickup, which he had plugged directly into his amp with no preamp or EQ unit.? As it turned out, the fiddler was Eric Aceto, luthier at Ithaca Stringed Instruments and inventor of the pickup.? Primarily known for his innovative electric/acoustic violins, Eric’s interest in amplified instruments had naturally led him to explore pickups.? To his ear, most pickups available on the market were either “too focused and had too much string sound and not enough wood or air, or it was the other way – too open sounding and not enough focus.? I was looking for a balance between those sounds.” 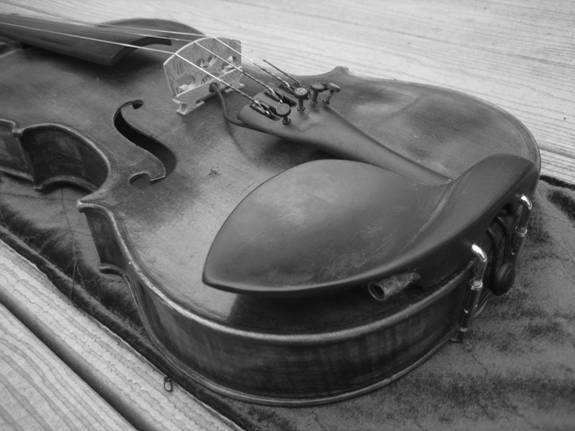 Eric recalls that finding the right balance took a lot of trial and error.? “I got a large selection of different styles and sizes of crystal and made many, many pickups.? I tried putting them everywhere and then came upon the idea that I needed to balance the string sound with the openness and wind sound of the instrument.? ? Tuning violin bridges on acoustic instruments, it works very much on an ‘X’ pattern.? Vibrations have to pass through the center of the bridge to the feet. You get a lot of the treble frequencies on the bass foot and the other way around.? I put the crystals in that area, above the feet but below the top part of the bridge, so you get not only the sound of the strings and the wood, but also the stuff coming up from underneath.? ? For every combination (of crystals and locations), I had to make a bridge and try it out on the instrument.? I usually played it on a gig that night.? I eventually found a size and dimension of pickup that I liked the sound of.”

The design that Eric finally settled on consisted of a bridge made of two sections – a slightly wider lower section in which the two transducers fit, one above each leg, and a normal upper section which can be carved to suit the violin and then fitted into the lower piece.

I decided to put the pickup to the test on a violin of my own whose sound I knew well.? I was pleased to find that the bridge containing the pickup, when carved to fit my violin, did not appreciably alter the acoustic sound of the instrument.? Thus I could continue to use the violin in acoustic settings without replacing the bridge, an important consideration. ? And I was very pleased to find that, as on Eric’s fiddle, the amplified sound was nearly identical to the natural sound of the violin, making it unnecessary to further adjust the tone with equalization.? The pickup responded well to bow dynamics and captured bow chops accurately.? The system performed very well on stage, even in “difficult” circumstances such as a noisy bar competing with amplified guitars and drums.? Depending on the quality of amp or PA system used, I’ve noticed a small improvement when going though a simple preamp but you can definitely get a good, natural sound without one.

Should your violin require seasonal bridge adjustments, the two-part design which separates the bottom of the bridge from the top allows you to have winter and summer bridges without changing the pickup.? ? Of course, you’ll need to get the bridge blank which comes with the kit professionally carved to fit your violin.? It might be wise to specify the height of your current bridge when ordering, so that the blank you get is of appropriate height.

The pickup system comes with your choice of a phone jack or else an RCA plug mounted under the chin rest.? The RCA plug is smaller and lighter, adding very little extra weight to the violin and staying conveniently hidden and out of the way while playing.? The placement of the plug underneath the chin rest, however, can make it a bit awkward to get at if you need to connect and disconnect it frequently.? I also got an occasional buzz at first, which I finally tracked down and remedied by inserting a small piece of felt around the plug.

Having experienced many disappointments over the years with various attempts at violin amplification, these minor issues are nothing compared with the immense satisfaction that comes from knowing I won’t have to grimace any more when I need to “plug in”.? If you are looking for a pickup that will accurately capture the sound of your acoustic violin, the Aceto/Violect Pickup System from Ithaca Stringed Instruments may be your best bet.

Just wanted to let you know I’ve received the cable and gotten the bridge installed and everything sounds terrific! When I first tried it out I couldn’t believe the sound was coming out my amp — it sounded so much like my violin, only louder.

Finally, let me just say that after several months of using your pick-up bridge on my 1969 Grawert hand made fiddle, I’m as happy as can be. It is a great pick-up, the best I’ve tried yet, and I’ve been trying them all since the Barcus-Berry T-bar transducer that we used to stick on our bridges with that grubby putty.